From Coast to Mountains

Home / Itineraries / From Coast to Mountains

This itinerary takes advantage of Moray Speyside’s rich and varied landscape; from the high tops of the Cairngorms to the cliffs and coves of a spectacular coastline. Moray offers great landscape diversity and the wildlife that goes with it, including the famous dolphins of the Moray Firth. 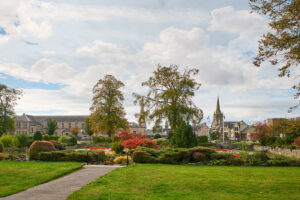 Begin today with a tour along the southern fringes of The Moray Firth, one of the most beautiful and scenic stretches of coastline in the world. Set out from Forres, a multiple Britain in Bloom winning Royal burgh, where a visit to Grant Park and the award-winning gardens offer a beautiful display and ideal introduction to the flora and fauna of Moray Speyside.

Look to the hill above the park and if the flag is flying from Nelson Tower you can climb to the top for a superb view of the Laich of Moray, the coastal plain between the Grampian foothills and the inner Moray Firth, spanning around 30 miles (48km) from the River Spey west to beyond Forres. Make sure to visit Sueno’s Stone, a Pictish standing stone situated on a raised bank on a now isolated section of the former road to Findhorn.  Standing at over 6.5 metres (about 21 feet) high, it is the largest such stone in the British Isles.

Head eastward from Forres towards Roseisle Forest where there are walks galore, then onward to Burghead where the bay is famous for its flocks of 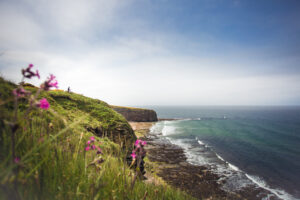 sea-duck where the headland is just the place for a spot of dolphin-spotting. The rocky coastline at nearby Hopeman has plenty of interest including pre-dinosaur footprints (and even the mark of a dragging tail!) on the sandstone by the shore.
The coastal path from Burghead to Hopeman offers easy walking for all abilities. The Moray Firth has the largest resident colony of bottle-nosed dolphins in the UK (though other cetaceans can often be seen.) The Moray coast has excellent viewpoints for cetacean-spotters.

Continue along the Moray Coastal Trail towards Lossiemouth, known as the Riviera of the North, where fine sandy beaches are perfect for a picnic lunch (weather permitting!) The woodland area behind the beach runs to the Spey Bay Wildlife Reserve and where the Moray Coastal Trail joins the Speyside Way there is also plenty to learn with a visit to the Scottish Dolphin Centre at Spey Bay.

Continue east along the coast, passing by Portgordon where seals are often to be seen on the rocky shore. Continue via Buckie and picturesque Findochty (black guillemots common offshore) to Portknockie. Here, the distinctive Bow Fiddle Rock, shaped by the sea from tough quartzite, can be seen from the popular coastal walk that can be continued to Cullen.

To the east of Cullen a wild, rocky coastline is easily accessible via a coastal path that takes in the Giant Steps (created to help walkers access a rocky cove) and brings the coastal walker to the hidden Sunnyside Bay.  As an alternative to coastal walking, if time and energy permits, climb the Bin Hill and the Bin of Cullen – landmarks for miles around and offers a grand walk for the energetic as well as superb views!

Remember too that all along these coastal stretches the skies are particularly dark over the Moray Firth to the north.

Today will be spent exploring Glenlivet Estate and The Cairngorms National Park.

Departing Elgin continue south on the A95, taking the B9008 to reach the boundary of the Glenlivet Estate. Part of The Crown Estate, this 23,000-hectare swathe of upland moor and woods lies between the Ladder and the Cromlix Hills, much of it within the Cairngorms National Park.

The diverse landscape supports a wide variety of wildlife including many of Scotland’s most threatened birds and animals. Sixty species of bird breed are resident on the estate and a further forty seasonal visitors and migrants may be seen throughout the year.

The communities of Glenlivet, Tomnavoulin and Knockandhu lie at the heart of the estate and make good bases for its exploration. A visit to the

recently refurbished Tomintoul Discovery Centre in the heart of Tomintoul offers an opportunity to plan your visit round the estate. In addition to farming, forestry and sporting activities, there is an extensive way-marked path network for all abilities which offers fabulous vantage points from which to view the extensive stretches of woodland, moorland and water-based wildlife such as red squirrel, roe deer, pine marten, wildcat, otter, salmon, osprey, grouse and golden eagle.

The dark skies in many parts of Moray, such as the Glenlivet Estate, the nearby Cabrach and along much of the Moray coast offer some spectacular star gazing opportunities. There is also a very good chance of seeing the Northern Lights or Aurora Borealis as they can happen at any time of year as long as it is dark enough!

Deeper into The Cairngorms National Park, the Moray boundary runs through the summits of Cairn Gorm and Ben Macdui which offer superb vantage points to enjoy fabulous views over the entire mountainous area.

OPTION: Why not try a wildlife, Land Rover or even an ArgoCat safari – a great way to get up-close with the wildlife and landscape? 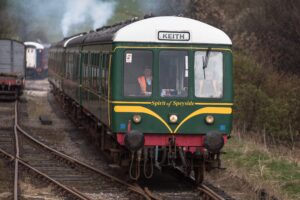 The journey from Keith Town station passes through some spectacular scenery with glimpses of the varied and often rare wildlife including red squirrels, deer, buzzards and other large birds of prey. Climbing through dense pine forests and rolling alongside the tranquil waters of Loch Park, this journey affords vistas not accessible by road. The railway operates from March to October with popular events at Halloween and Christmas. You can also charter the train for groups and special occasions.

Onwards from Dufftown to marvel at the Craigellachie Bridge, a cast-iron arch bridge spanning the River Spey just below the town. It was designed by the renowned civil engineer, Thomas Telford and built from 1812-1814.